TAKE SOME TIME TO READ OUR ARTICLES 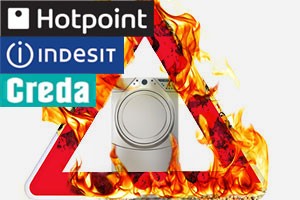 In November last year, the manufacturer released a notice of a fault affecting Hotpoint, Indesit and Credia models of tumble dryers, which could cause fires if fluff comes into contact with the heating element.

Although the company has contacted 3.8 million customers about the fault so far, only a small 135,000 cases have been resolved to date. The delay in resolutions is partly due to the manufacturers being unaware of who owns its products after they have been sold to retailers and then purchased from there by the consumer; which means they are unable to contact the customer directly.

This recent fault has raised concern with the UK’S Retail Ombudsman, and a central register is due to be launched later this month to ensure customers can be contacted in the event of a fault. Members of the public will provide their contact details at the point of sale, and in the event of a recall, will be automatically notified by text or email if they own a faulty appliance and need to take action.

To date, 750 fires have been caused by faulty Hotpoint, Indesit and Credia Tumble Dryers in the last 6 years, and despite manufacturers advising the appliances are safe to use as long as they are supervised during operation, campaigners and charities like Electrical Safety First recommends to stop using the appliance altogether until it has been checked by the manufacturers engineer.

One case recently saw an owner of the appliance panic and pour water over the tumble dryer once it had caught fire, in hindsight he acknowledged this was not safe to do with an electrical fire, but this places emphasis on the importance of making sure you are educated and protected should anything like this happen in your home.

For details of the recall, see the link here to Electrical Safety First’s Recall page.